OUTINGS
​
Our preferred method of payment for Outings is by bank transfer (BACS).  Click here for a guide.  Cheques are also acceptable.
​ 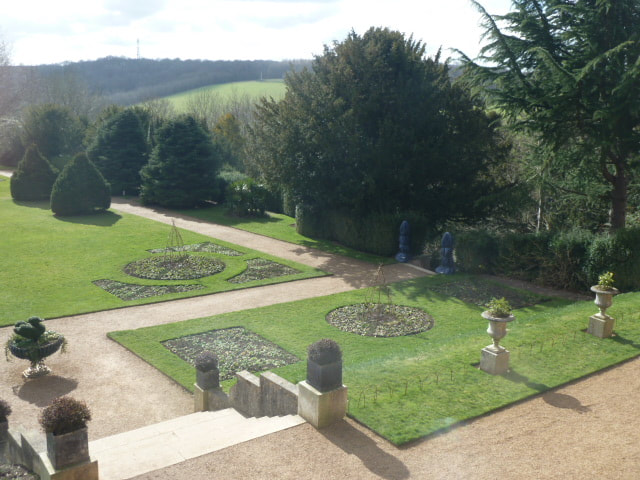 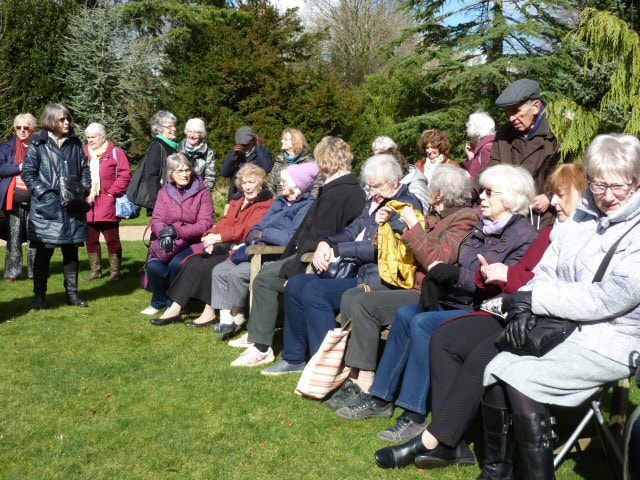 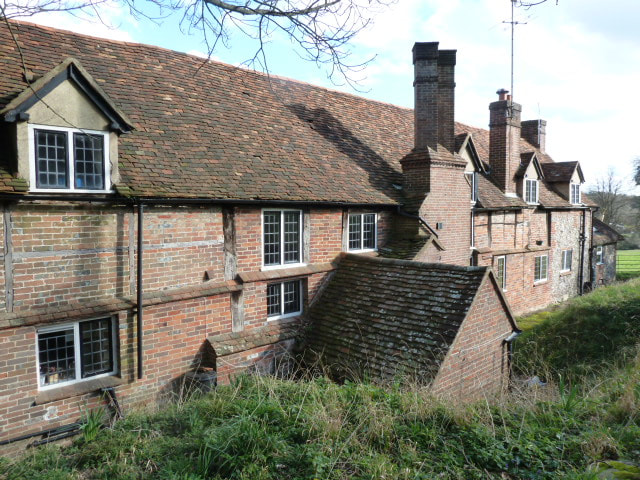 Outings Report March
​The first outing in February was to see Chicago at the Congress Theatre Eastbourne. In March we went to Hughenden Manor. Reviews of both outings are below. At the time of writing our April visit to Hatchlands Park is almost full, but if you wish to go on this outing please see the application form in February’s newsletter.

In May we will be going to see two beautiful gardens, starting with a private garden at Leonardslee Lakes, Lower Beeding famed for their outstanding Rhododendrons, Azaleas, Camellias, Magnolias, Bluebells and beautiful ornamental rock garden.There are numerous walks to explore through the 240 acres of Grade One listed gardens, parkland, lawns and forest areas with an abundance of fascinating fauna as well as flora. There is a rare colony of wallabies introduced in 1889 as well as several species of deer. There is also a dolls’ house exhibition which depicts the Edwardian estate and surrounding villages. They have a sculpture park and art gallery which is included in the price of the garden ticket. There is also a free buggy service around the lower garden and lake on a first come first served basis. Refreshments are served at the Clocktower Cafe and Farm shop. Only picnics bought from the Farm shop can be eaten in the gardens.

In the afternoon we will take the coach to another beautiful garden at Nymans which is just 3 miles away. Nymans is a National Trust house with a garden for all seasons, extensive yet intimate, set around a romantic house and partial ruins. We should see blossom, bulbs and stunning corners through stone archways and walk along tree-lined avenues surrounded by the lush countryside of the Sussex Weald. The Pavilion cafe serves tempting treats and hot and cold meals throughout the day. Unfortunately the house is temporarily closed till the end of July due to renovations, but this will not spoil the visit because Nymans is noted for its beautiful garden.

If you would like to visit these stunning gardens, see the application form at the end of the March newsletter. Please note both of these gardens require a fair amount of walking. 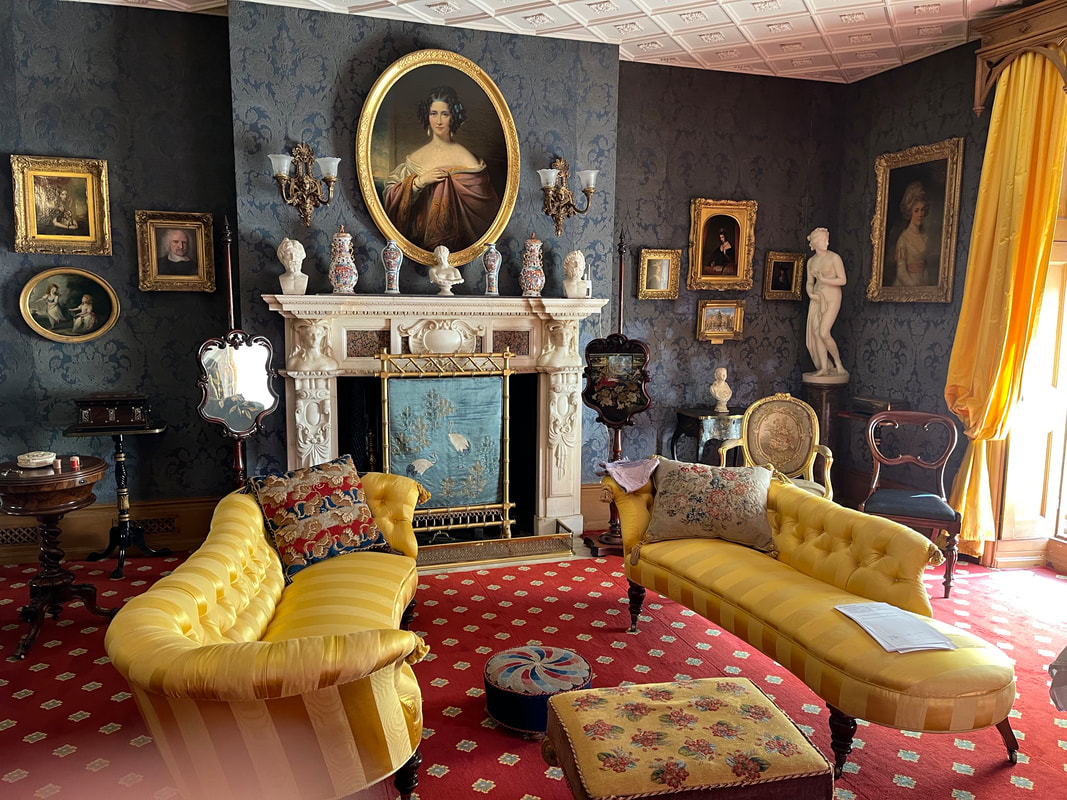 Well, weren’t we in for a surprise, Lots of them? Benjamin Disraeli moved into Hughenden Manor with his wife Mary Anne. The red brick Victorian manor remained Disraeli’s home until his death in 1881.

A short walk too where he was laid to rest next to his wife, is well worth adding to things to see.

The house sits on a hill with magnificent views. Red Kites soar high above our heads and the beautiful gardens.  Hughenden Manor just keeps surprising us. The house is full of them. I am deliberately holding back information regarding our trip, those who were there will understand. We don’t want to spoil the adventure for U3A members who haven’t yet visited. You won’t be disappointed.  Disraeli allows us into his inner (not that he has any choice) sanctum, the house is full of interesting facts of his life.
​
We wandered freely. Guides on hand if needed. The café staff couldn’t do enough to make us welcome. Carts to help navigate any obstacles. Everything and everyone were perfect. You’d have a job to find anything to moan about Hughenden, o there is one thing, ‘the snoring on the way home’. Tee hee.
Happy Days…..

Visit to the Congress Theatre Eastbourne to see Chicago
​​On Thursday 17 February our first outing for 2022 took us to Eastbourne to see the musical Chicago at the Congress theatre.  The theatre was packed.  It was lovely to see so many people determined to go out and about again.  As for the show, well Razzle Dazzle girls and all that Jazz!  The dancing was eye watering.  Perhaps a bit too eye watering for some, but Faye Brooks, playing Roxie Hart,  was mesmerising, particularly in the scene where she imitated a puppet having its strings pulled by Liam Marcelino,  playing Billy Flynn,  her crooked defence lawyer.

Djalenga Scott was equally amazing playing Roxie’s rival Velma Kelly.  Djalenga has the longest legs I have ever seen, like Betty Grable’s they should be insured!
The dancing was raunchy, the girls beautiful, the musicians not hidden away in the pit but joining in right up there on the stage.
​
And at  the end of the show, Barry, our coach driver, was parked almost right outside the theatre  to take us home. 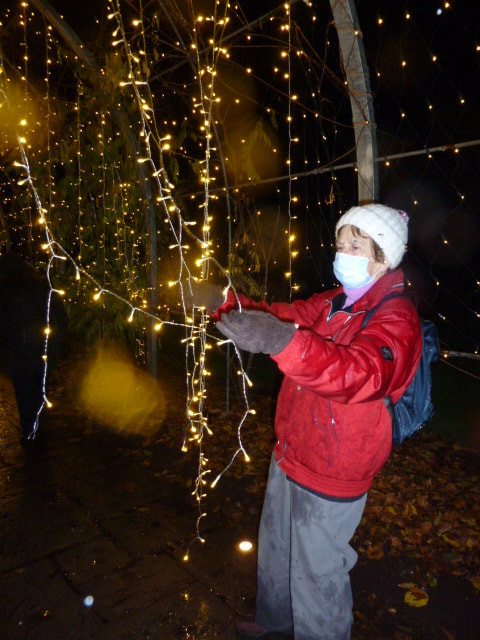 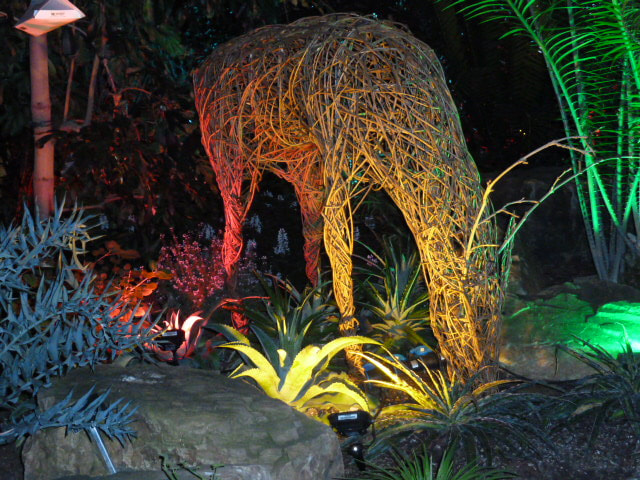 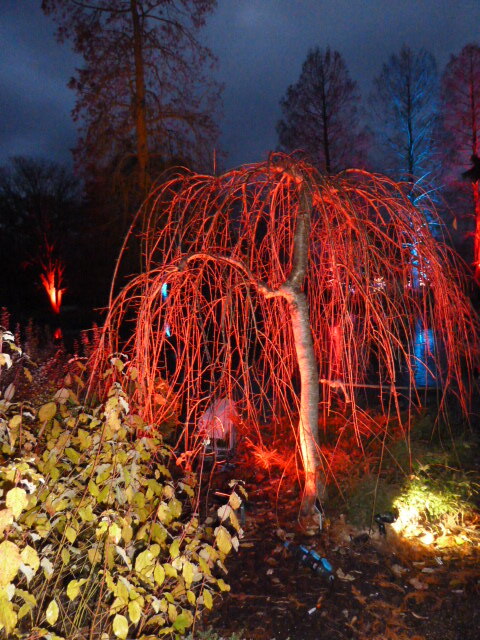 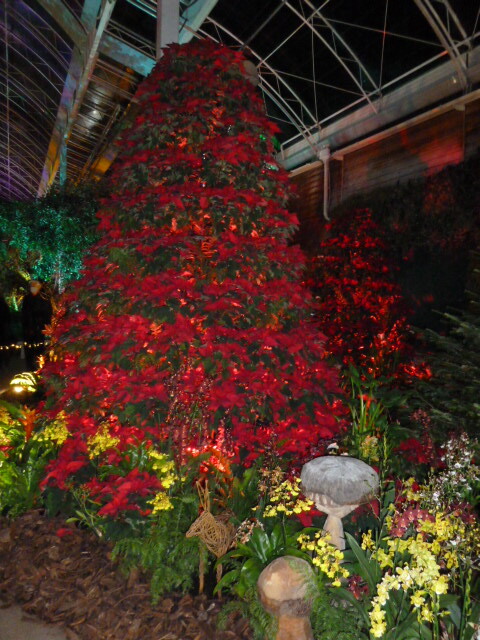 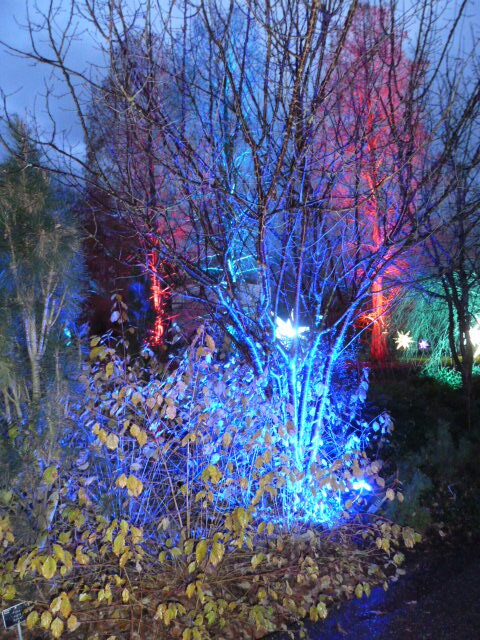 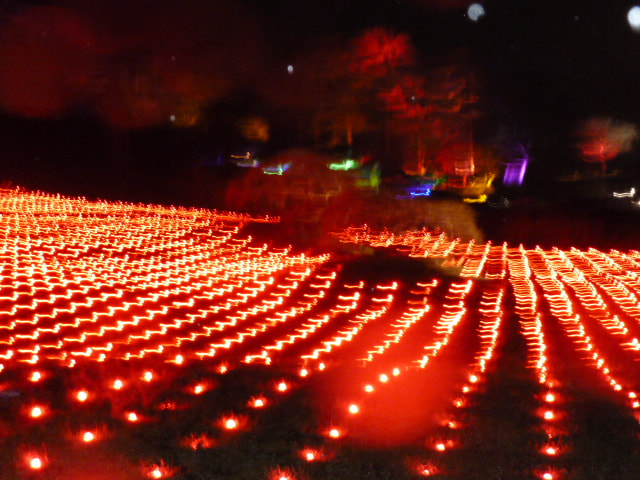 When our coach set off for the Wisley Glow it was packed.  The Glow was scheduled for 4 pm but exceptionally the M25 was not gridlocked and we were early so Barry, our very experienced driver, took us off piste for a detour to Oxshot and a bird’s eye view of the sumptuous mansions favoured, amongst others, by footballers’ wives.

Even so we were still early and had plenty of time for hot chocolate, mulled wine, or whatever took your fancy, before the Glow started.

Finally, darkness fell and we could follow the Glow trail.  It rained but that didn’t matter, rather it enhanced the experience, lasers lit up the dark sky turning the raindrops into diamonds, coloured fountains sprung to life shooting up from the lakes, waterfalls thundered and changed colour.  We walked through tunnels of light accompanied by classical music, goblets of fire exploded to the foot tapping beat of “New York, New York”.  Even the trees appeared to shimmer, and of course there were carols.  It was simply stunning a banquet for the senses, and a great way to welcome in Christmas.  I loved it.  And if that wasn’t enough there was still plenty of time to explore and perhaps buy the lovey goodies in the Christmas shop.

​Thank you to Sheila Casey for the report and to Stella Westrup for the photos.
Report on October Outing to Audley End
The first sighting of Audley End House was magical. The morning sun lit up this beautiful house, sitting comfortably in the most amazing gardens. The house and tea rooms were available upon our arrival, with no time restrictions on viewing the house, giving us the freedom to explore Audley End from top to bottom. Guides were on hand and happy to answer our questions. There was so much to take in, paintings of residents past by Holbein and Canaletto, and many Dutch and Flemish old masters . Venturing into the huge laundry we found the household linen left hanging above our heads to dry. I believe the kitchen and the laundry have been used in many period dramas along with the stables. Needless to say there’s something for everyone. We enjoyed all Audley End House had to offer.
Report on September Outing to Highclere Castle

As the coach approached the grounds the sheer size of Highclere took your breath away. Thanks to our driver Barry’s impeccable driving we arrived pretty much on time and couldn’t wait to scramble out of the coach on this perfect day. The castle’s undulating grounds stretched out enticingly; dotted here and there with huge trees, strategically placed follies, walled gardens, and tables set for tea.

Fans of Downton Abbey were in for a treat. All the public rooms had billboards highlighting set pieces from the drama with the actors in situ, an inspired idea. We could see Lady Mary standing just in front of “that fireplace” or the Dowager Countess of Grantham, (Maggie Smith) straight backed, holding forth from “that sofa”, Lord Grantham in the smoking room, and was that Carson waiting in the wings?

As we moved through the library and sitting rooms light flooded in highlighting painted ceilings and painted walls; rooms full of colour, amber, ochre, burnt orange and gold. No magnolia here. Family and Royal photographs decorated every surface. Upstairs were more treats as the bedrooms were open; each enjoyed a different colour scheme with sumptuous drapes and, since they are still in use, modern plumbing!

​We were so fortunate in being the last public tour of the season. The castle was due to close to the public the very next day and the Count and Countess were moving back in to host private tours and their own guests for the rest of the year. We were assured the bedrooms were all in use by the guests as were the state rooms, this was no museum it felt really lived in. Finally, the Tutankhamun display in the basement was mesmerising and merits a paragraph of its own, but I haven’t the space! Our coach drew away leaving a lingering view of the castle and the remembrance of how the other half live! Joan thank you for organising such a wonderful day. Sheila Casey

​
Report on Outing to Uppark House

Our August outing was to Uppark House, a 17th century residence donated to the National Trust in 1954, which overlooks the stunning panoramic South Downs. The gardens were designed by Humphrey Repton, the foremost architect and landscape designer of his day. It survived a devastating fire in 1989, resulting in a pioneering conservation project. It was free flow and everyone admired the interior of the house with all its beautiful paintings and exquisite treasures. The Doll’s House especially left people in wonderment. Our members enjoyed the day out in spite being caught up in a 12 mile M25 tailback returning to Tunbridge Wells. Thsnk you to Stella Westrup for organising. ​

The  house was  last owned by Lord Fairhaven who bequeathed it to the National Trust on his death in 1966. He primarily bought it because it was near Newmarket race course and the queen mother visited and stayed in  the house when she went to the race course. The origins of the house date back 900 years and was an infirmary and then a priory but that was dissolved under Henry the eighth’s reign.The ruins remained until early in the seventeenth century when the present house was built .There is an eclectic collection of antiquities dating from the early Tudors to the 1960’s. The gardens were beautiful, consisting of a formal garden,  herbaceous garden, a rose garden,an area that had stunning  silver birch trees and many more lovely areas of the garden. 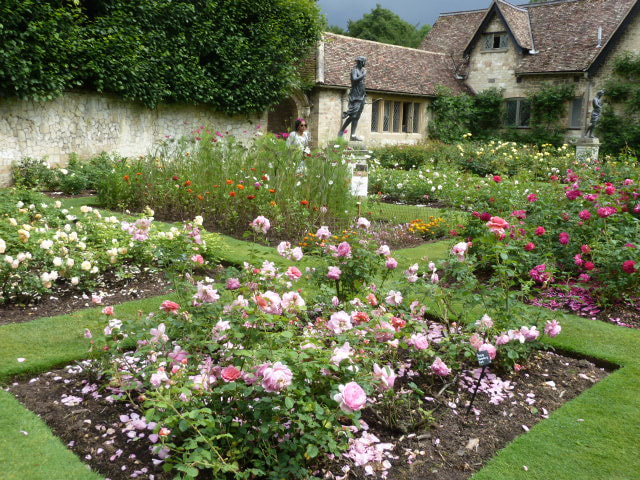 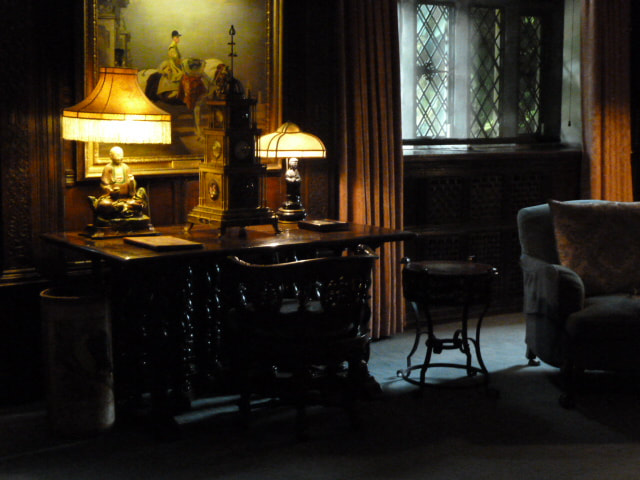 Here are some of the outings that we enjoyed before Coronavirus restrictions came into effect:
​
​The Royal splendour of Windsor Castle.  All that glittered was gold!

​The awe-inspiring Bletchley Park set in acres of garden, renowned for breaking the Enigma Code.

​Polesden Lacey was a truly beautiful house set in very pretty gardens.  The interiors had been furnished with no expense spared and our Queen and Princess Margaret spent many holidays there as children.

The Spitfire and Hurricane Museum at Manston was a homage to the very young and brave men that flew these planes and lost their lives. A truly inspiring visit, plus we visited Reculver bay where the bouncing bomb was trialled.​